Today I am linking up with Dawn and others who follow her blog.  On Random Journal Day,  the first Friday of each month, we share an entry from one of our journals, whether it's yesterday's entry, or last months, or even one from several years ago...just share!

Today, I want to share something I have uncovered amongst a ton of things my mother left with me...

Instead of sharing an entry from my own journal, I want to share excerpts from two different sources...moments out of the life of a grandmother I never knew...and the mother my own mother never knew...

Back in the 1930's, there was no way of knowing; but her mother was pregnant - with twins!

They had planned the name of their new baby, my grandmother and grandfather.  If the child was a boy, he would be "William Lenard" after their father; and if it was a girl, she would be named "Fredrika" after their mother.

So, keeping with those names, the twins were William and Fredrika, later nicknamed "Billy" and "Betty".

Today I wanted to share from two of the documents I uncovered after my mom passed away (June 2012) as I was going through all of the "stuff" she had left with me.

First, I'll share what I call "Fred's Last Letter" dated December 29th, just one day before what would be her last... 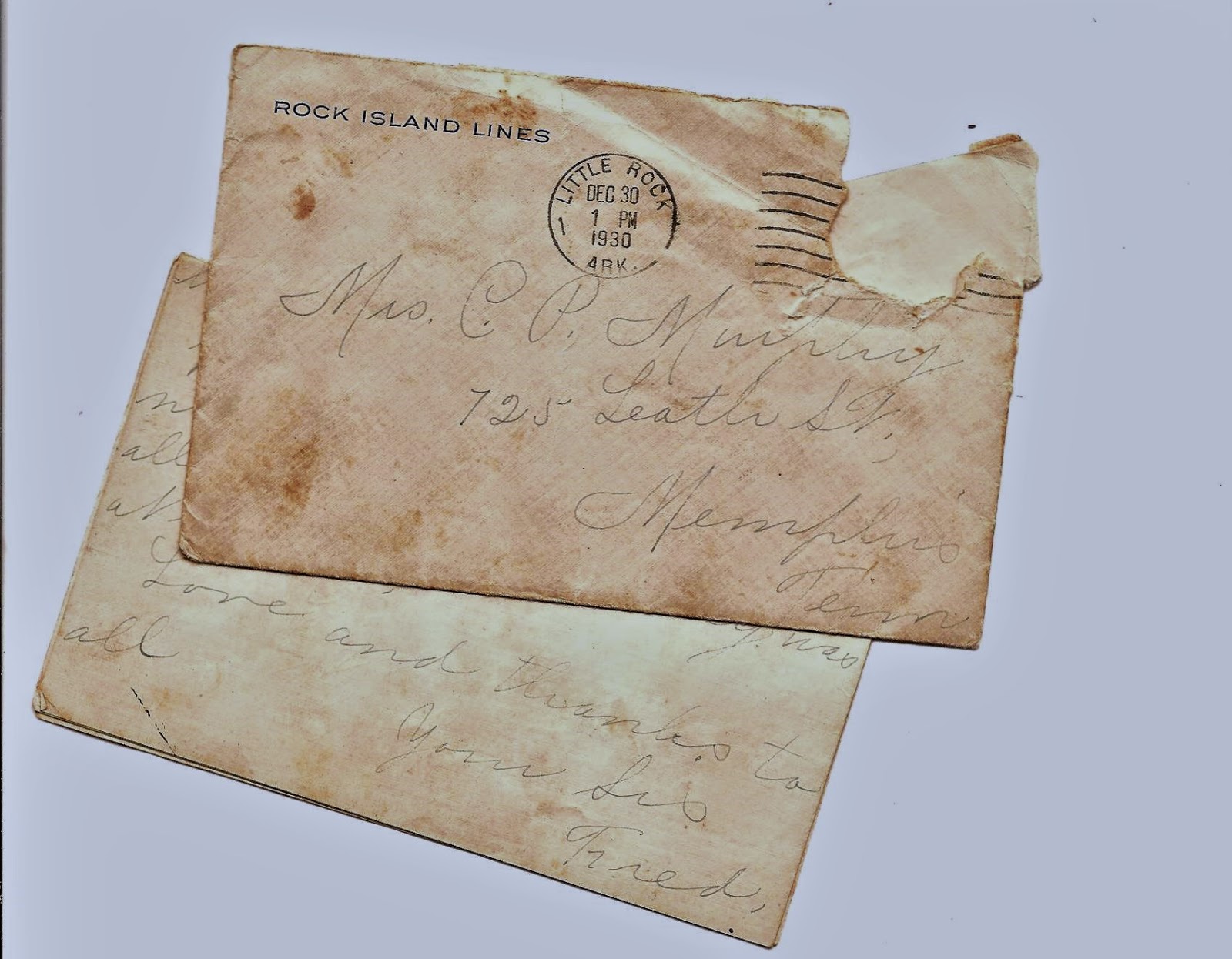 From Little Rock to Memphis
Cir. 1930

(This is the actual letter that I found in that huge box of "stuff" along with the second document, which I'll share in a moment.)

"I am all in today, haven't been feeling good for so long but have been worse since Xmas night.  The Dr. said I would go till the 17th but I don't see how."

Little did she know what just one day would hold for her...

The letter was full of thanks for gifts that had been sent by Fred's sister; and apologies for not getting anything sent to them.  She added,

"Hope Dad liked what we sent him."

(He was my Great Grandfather)!

Fred listed what she received from her husband, my grand father William; or "Billy", as she called him.  And what my Aunt Loyce, my mom's older sister, received.

(Here I must confess at first I didn't know who "Loyce" was!  Yes, I knew my mother's sister; spent many days with my aunt and uncle and two cousins!  But, I always knew her as "Lois"!!  I had to repeat that name - "Loyce" - several times before it clicked!)

And near the end of that last letter, she wrote, "I can't hardly wait to see some of you all.  Am hungry for the sights."

The next day she gave birth to a little boy and a little girl; 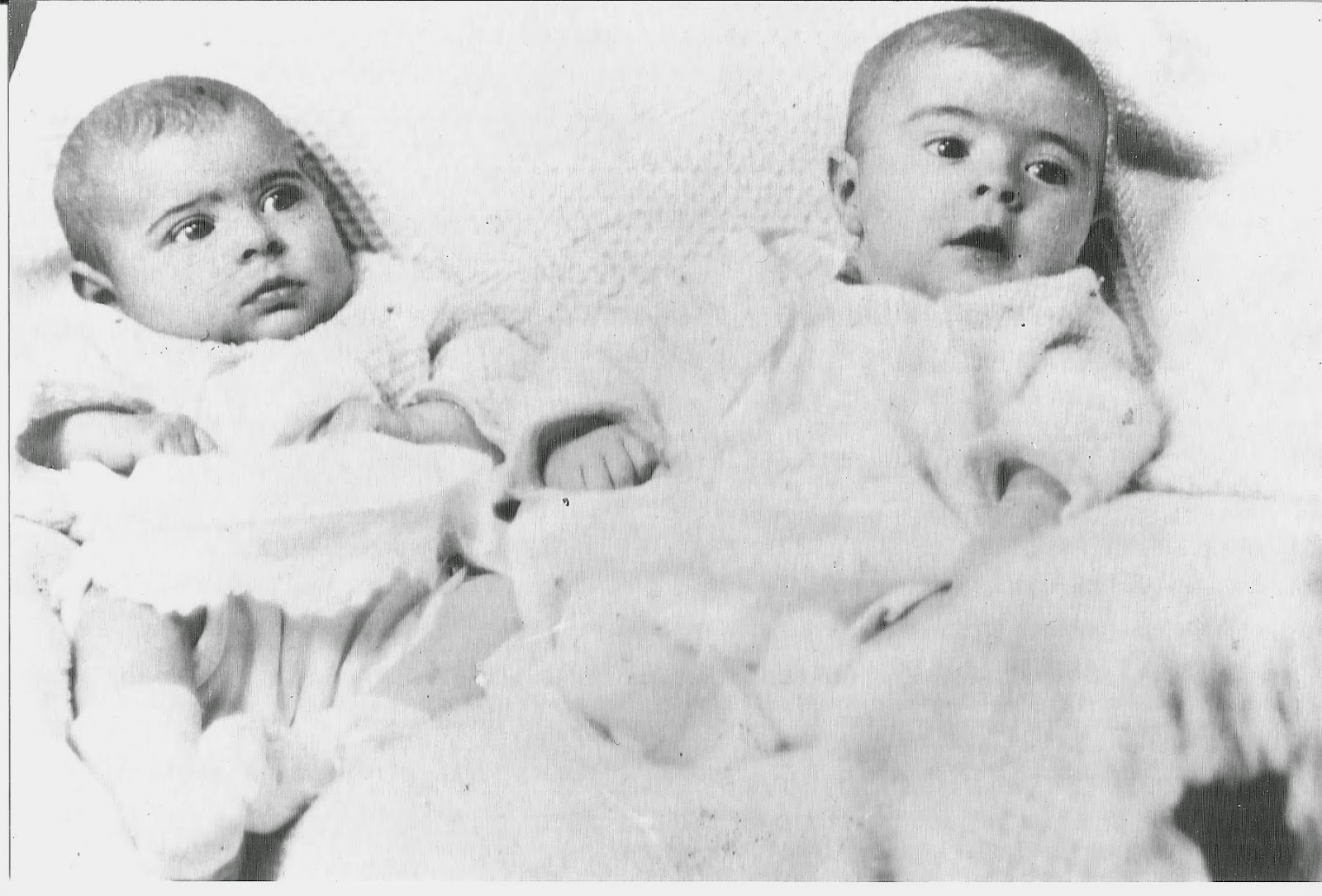 And lost her life giving birth to them.

My mom shared many stories about the problems associated with a man who was left with two new born babies, as well as another child; and how he had to depend on other relatives to help raise them.  She shared about the days spent in a Catholic orphanage until, as teenagers, her brother went to live with their father and his new wife, and she went to live with their older sister and her family.

(Again a confession; I just wish I had shared many more stories with my mother before she passed.  And, there are so many photos I have come across that I have no idea who they are or where they were taken).

But, I never dreamed I'd discover these precious documents; a letter in my grandmother's own handwriting; and the second document:

...A two-page typed message, "In Memoriam", that was given at the memorial service for my grandmother, Mrs. W. L. "Fred" Moore, by F. A. Lehman, their minister.

Below are excerpts from that memoriam:

Almost at the time of the birth of Christ, two new lives entered the world, and almost at the dawning of the New Year, the mother, who gave them her all, entered into a new life beyond.

We were in the nursery and the little girl gave a cry -- said the nurse, "I waited a long time for that cry last night; I was afraid it would never come;" and we longed to take the babe in our arms and hold her close, but the nurse of a new born baby is all powerful and we didn't quite dare to ask.

Then we turned to the boy, so perfect, one hand closed, asleep.  It was a big price to pay, said someone.  Suddenly the babe opened his hand, stretched it upward, gave a long sigh and settled back to sleep...

...It was worth while; in her death she gave life; all she had of life and strength she contributed to the next generation--the highest gift life holds and a woman's peculiar mission.

In our sadness at parting from her in this life, we can glory in the crown of her womanhood, and pray for courage to continue to face life bravely, and touch life and live life even as she did, and leave our mark upon it, while we have our being.

We do not know why, in God's wisdom, she was not permitted to stay with her loved ones but we do know, that in the end, the love poured out upon these little ones, will bring healing to aching hearts.  Long thoughts must have been hers in the long months and what pleasure the visits and little attentions of friends must have given her.  Her last thoughts were for her loved ones and the time when she should be back at church."

Both of these documents will be treasured; connection to the Grandmother I never knew, who bore the Mother I treasure...

"So, after reading the book "Heaven is for Real"...I know that Mom has been reunited with Dad, and they are dancing their way across heaven, as Don (my brother) said at her service.

But, it has also occurred to me that she is reunited - has met - the mother she never knew!!  It all gives me hope!!"

When my mother passed away, we were comforted in knowing she was reunited with my father who has been gone since July 1990.

How blessed I was on that special Mothers' Day to realize...

My mother was also reunited with her mother, too! 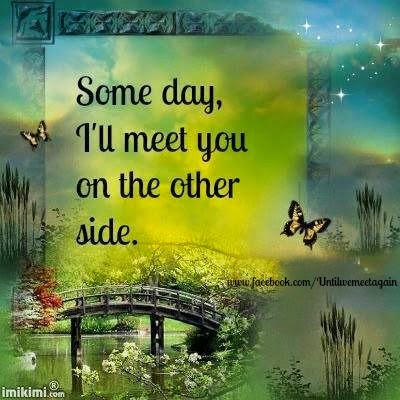 So, I did what I was supposed to do for Random Journal Days, after all that; I wrote from my own journal!

Thank you for stopping by to read my post today! I appreciate your reading and commenting - your comments are a welcome encouragement for me to continue one of my favorite things - writing!

You are special to me; and your words help in more ways than I can number...Thank you just isn't enough! 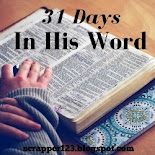 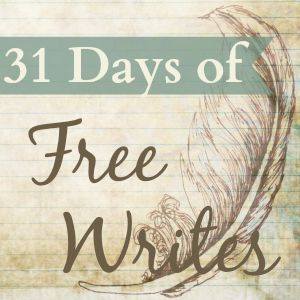